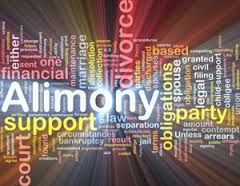 The subject of spousal support, or alimony, in divorce proceedings bears some scrutiny. In California, a family court may award a monthly allowance to be paid by one spouse to the other for the purpose of maintaining the standard of living to which the recipient was accustomed during the marriage. Alimony laws were originally created to protect the woman, the traditionally unemployed spouse in a marriage, from financial ruin after divorce from her husband, who was usually the sole breadwinner. The law arranged for monthly payments to be paid by the husband for the lifetime of his ex-wife or until she remarried.

Now, in an era when most women work and have marketable skills of their own, the old views of alimony seem retrograde, but stories still abound of contentious divorces leading to bitter husbands feeling trapped in open-ended financial obligations to ex-wives “living easy” off the proceeds. That’s certainly the case for Steve Clark, who founded the advocacy group CalAlimonyReform.org after the cost of alimony litigation following his own divorce ran over $100,000 and still resulted in an on-going support obligation to his ex-wife, an employed dental hygienist. [CBS Los Angeles: Divorced Dad Fights To Do Away With Spousal Support In California]

Because divorce is an emotionally turbulent process in its own right, the underlying gender politics of ongoing spousal support can easily be warped by feelings of loss or betrayal common at the end of a partnership. And while there is certainly room in the law for abuse of the system by the financially weaker spouse, alimony, as it is legally understood now, is intended to provide a financial buffer to a spouse who may have been out of the workforce during the years of the marriage or might lack current skills to be competitive when reentering the job market as a single person. The understanding is that the supported spouse will begin seeking employment with all reasonable earnestness and haste, receiving support as a temporary stopgap ending in self-sufficiency and/or cohabitation with or marriage to a new partner.

Beyond determining the standard of living enjoyed in the marriage, there are many factors considered by the court when determining the amount and to whom alimony is awarded. These include the marketable skills of the supported party; the extent to which his/her earning capacity was affected by the time he/she may have spent serving a family/domestic role; the ability to pay alimony; the assets and financial obligations of each party; the duration of the marriage and; the age and health of the parties. Being a no-fault jurisdiction, California family courts will not consider the nature or number of any affairs one spouse may have had in its alimony ruling.

For marriages of long duration (10 years or more), courts are not allowed to set a definite termination date for spousal support at the time of the trial. This is often misinterpreted by both sides of an alimony settlement as a ruling for lifetime spousal support for such marriages in California. This is not the case; rather, it implies that a determination will need to be made by the court after hearing testimony from both sides in order to determine appropriate terms of support, if any. All of these multi-faceted considerations indicate that experienced legal counsel can be essential for negotiating an equitable and timely resolution for both spouses. While alimony settlements can be negotiated out-of-court, and in some circumstances, legal fees minimized, it is often difficult to establish specifics (i.e. exact duration of support and exact dollar amount of the marital standard of living) without a judge’s final authority, leading to final financial obligations that far outstrip the expense of one-time legal arbitration. In other words, DIY alimony settlements can hurt in the long run.

Spousal support doesn’t have to be a financial life-sentence. With the help of trustworthy and experienced legal counsel, it can work for both parties as a positive step toward freeing each other of continued association and dependence.