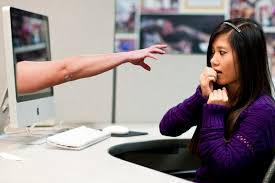 It is widely known that Domestic Violence Restraining Orders are issued to protect victims from further and or imminent harm from their abusers. As the urgent nature of this action implies, the orders are granted for extreme and exigent circumstances for spouses, partners, and children. Those who end up on the defending side of DVRO proceedings may find relief in rationalizing the minutia of the criteria for a DVRO.

Case in point – Phillips v. Campbell. James Campbell and Amy Phillips met through a common interest in bicycling. As time went on, the two grew closer and developed what looked like a casual dating relationship. One day, Mr. Campbell suggested to take the next step together, to which Ms. Phillips replied that she would rather stay friends. Hurt and angry, Mr. Campbell did what most bitter rejected romantic hopefuls would do in the 21st century – take their frustrations to the internet. Mr. Campbell began to slander Ms. Phillips on every social media channel possible by posting private photos and information for all her family and colleagues to see. He also reached out to said family and friends to express his anger. Ms. Phillips filed for a Domestic Violence Restraining Order (DVRO), which was granted. Mr. Campbell challenged the grounds on which the Domestic Violence Restraining Order (DVRO) was granted based on the following points:

Fortunately, the decision was upheld in Ms. Phillips’ favor (for a Domestic Violence Restraining Order) and the courts addressed Mr. Campbell’s arguments in a fair and rational matter. First of all, we can agree that first amendment rights are not meant for the justification of irreparable harm to another person. Period. Now let’s move forward and take a look at how these key points tie into the relevance of the modern dating scene and it’s repercussions on the scope of family law.

Let’s preface this by addressing the pitfalls of ambiguity in a relationship. Millennials and close contemporaries have an entirely new field to navigate, as it has become more acceptable to flourish a causal relationship without the pressure to adhere to cliché titles or roles. This progressive restructuring has certainly shifted the make-up of all homes, but it also comes with its share of consequences. The ambiguity of today’s dating scene leads to unwanted ambiguity of limits. In the absence of trite, uncertain titles, an element of mutual respect should always be present. “Non violent” or not, when that sense of respect is breached, have the courage and confidence to take your next steps to move forward.

The court’s reassurance of the ruling behind Phillips v. Campbell bring the same, familiar kind of relief that one feels once one is able to associate a certain name to an uncertain thing. Simply put, just because there isn’t a name to it, doesn’t mean it doesn’t exist. Abuse is abuse. It can be insidious, passive, and can easily take the form of many micro-aggressions that do not arouse suspicion outside of the relationship.

At Desai Family Law Group, you can count on a team who is not only up to the minute on the latest legal issues, but a team who is sharp enough to seamlessly apply and translate this information in real time. We have extensive experience in navigating the emotional turbulence of abuse, and you can trust us to obtain the relief and protection you and your family deserve. Find out more about how we can obtain a Domestic Violence Restraining Order on your behalf.